A boiler is only as effective as its feedwater, and all water is not the same. Bad feed water is the grim reaper for boilers, shortening their life span and killing their efficiency. One of the major problems that facilities face is the presence of highly conductive water in their boilers. The amount of impurity in the water is directly related to how highly conductive the water is. Water conductivity can be measured by using the total dissolved solid chart, which Yamath explains. 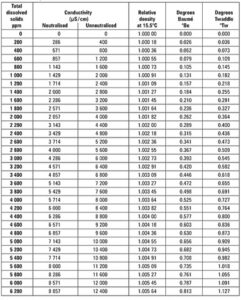 What can conductivity effect?

One of the most common problems that high conductivity water produces is scale. Boiler scale is a buildup of matter, chemicals, or minerals that harden inside of the boiler. As the boiler create steam, the impurities commonly solidify along the tube surfaces, creating scale. This drastically drops the boilers’ ability to transfer heat, which decreases efficiency and can lead to a number of other problems. Tubes have a higher chance of overheating, failing, and having costly repairs. The statistics around fuel efficiency when scale is present are also a pressing issue, leading to around a 5% drop in fuel efficiency.

When a boiler has high conductivity water, it also will generally have issues with oxygen in the water. Oxygen does most of its damage through corrosion, leading to pitting and holes inside of your boiler. During feed water intake, if water is not properly treated, oxygen, red iron, hematite and other impurities will wreak havoc inside the boiler.  Damage doesn’t necessarily stop at the internal surface. Oxygen attacks have the ability to destroy headers, drums, and even piping.

An acid attack has the ability to occur when the PH level of intake water is below 8.5 on a standard scale. An acid attack causes the boiler feed water to foam, leading to extremely low levels of efficiency. Carbonic acid is the result of high conductivity water condensing. This acid prevents the PH of the condensate from stabilizing before it enters the boiler again. When these high boiler water solids are present within a boiler, foaming begins, leading to a drop in efficiency.

How to prevent/deal with high-conductivity water

As it might go without saying, the easiest way to prevent high-conductivity water is to constantly monitor your boiler. Monitoring tools help to consistently track regular levels of PH and TDS so a sudden spike is immediately identifiable. Often, the best action against high conductivity is early action. However, if a boiler becomes out of balance, there are still many ways to fix it. 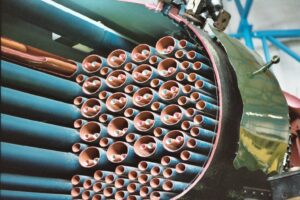 Many different chemicals are into the feedwater in order to get rid of unsafe levels. The goal of these substances are to prevent scale, eliminate foam production, and provide in-boiler softening. Application of these chemicals in unison with feed water provide a non-labor-intensive fix to high or low conductivity boilers.

Conductivity controls are an excellent tool for ensuring that your conductivity is always at a safe and consistent level. When a boiler is operating with a constant conductivity level, it allows for better efficiency, which leads to saving money. These controls also help with regulating the chemical program that is present in the boiler. Constant monitoring helps to compare the conductivity of the boiler to the controls. Depending on if the measurements differ from each other, it might be a good idea to blow down and flush the main sensor.

Like with any piece of mechanical equipment, scheduled cleanings and checkups are a must. The conductivity sensor is only as precise as its last cleaning. If the sensor were to become contaminated, the readings would begin to be unreliable and throw off the balance within the boiler.

The main requirements for conductivity tools have to do with four things; conductivity range, temperature, pressure, and mounting. All of these are extremely important in order to find the right fit for your boiler and provide you with peace of mind.

This type of sensor is cell constant and designed for use in applications that generally have low conductivity. The bench mark for use, in most cases, is below 1000 mS. Two separate electrodes attach to the working boiler. When attached, the electrical probes create an electrical field between the sensors. The sensor is then able to read and report the current conductivity that is present within the water of the boiler. 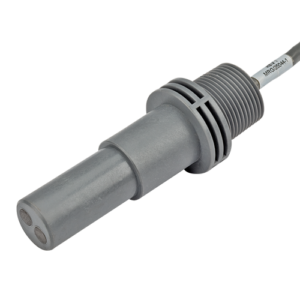 Toroidal sensors differ from contacting sensors by not having direct contact with the process. It is made up of two coils, a driver and a receiver, which are both surrounded by a plastic casing. They are mainly used in situations where a contacting sensor would be corroded. They are found in conductivities that chart above 200uS. An induction field is generated between the two coils that fluctuates depending on the conductivity of the water.