It can be tough to determine where to start when designing a piping layout structure that’s right for you. To help make your decision process easier, we’ve put together some valuable information on compressed air piping systems to aid you throughout the process.

THE PIPING SYSTEM AND COMPRESSED AIR

An air compressor is a device that transfers power using an electrical, diesel, or gasoline engine, in the form of compressed air. Piping systems bring together every element of your compressed air system and can make or break a system. That is why it’s essential for building managers to pay attention to the layout and design of their piping.

Before designing your compressed air piping system, its critical facility leaders focus the design around the compressed air system’s connectors. After all, leaks are likely to occur within your connectors, which can be your facility’s biggest threat if not fixed properly.

Other factors to consider that can have a significant impact on your piping system’s pressure efficiency and leakage are:

If sharp angles are present throughout your piping system, this could severely impede the flow speed, resulting in reduced pressure. As air flow emerges from out of a bend, it often becomes turbulent. This is the opposite of the “laminar flow” you are looking for and results in wasted energy.

Did you know: Turbulence caused at a 90-degree bend results in about 3 to 5 PSID of pressure loss?

Facility leaders will want to ensure there’s a straight path for airflow. Excessive turbulence can cause major pressure drops and decrease your piping system’s pressure efficiency.

Throughout most piping systems, water will corrode certain types of pipes, resulting in rust to flake into the pipe’s air stream. The water that transpires from the compression starts when air is taken in by the compressor when ambient air is presented.

Rust starts at the at your end-use equipment and can:

The buildup of moisture is unavoidable, but you can manage it. One solution to change the supply inlet source where the air is being drawn in. Water from the compression is normally heavier than the compressed air itself, causing it to fall towards the bottom of the compressor. That’s why it’s important when air draws in, it’s distributed from the top of the compressor. This will result in taking in less moisture, and having less buildup.

Drying the air before it enters the compressor is an even more effective means of reducing moisture. This will require you to pass your airflow through driers which can slow down the airflow and reduce pressure.

Did you know: Removing moisture from your airflow early on allows your air to circulate in the piping more easily.

To alleviate this task, many compressor installers will require you to use an aftercooler. The aftercooler cools the air when it leaves the compressor, so a majority of the moisture will leave before it heads into the piping. Once it heads into the piping, the air feeds into a filter with a drain to remove the liquid from the system. When air goes through the aftercooler’s filters, you will see less moisture in your airflow immediately, once it has left the compressor.

Additionally, in many piping system’s infrastructures, corrosion can be a major issue. If presented, corrosion in your piping system can break off and generate obstructions throughout your system.

Many obstructions occur in your piping’s:

One solution to handle air particles building up in your system is by using and regularly replacing air filters. It’s essential to have air filters in the compressor, so they are able to remove hazardous particles that might circulate throughout the piping. This prevents clogging devices such as the valves and end-use nozzles.

You may be asking yourself, “Which type of piping is best for my system?” If you aren’t sure where to start, we suggest either plastic and metal piping.

If you’re thinking about purchasing plastic pipes, there are many benefits to them including:

Con: In some situations, PVC and CPVC have caused a number of incidents. The Occupational Safety and Health Administration (OSHA) banning them for use in high-pressure systems.

Pro: ABS, PE, and HDPE are all OSHA approved in the use of compressed air piping.

Understanding lubricating oil is as important as selecting the right plastic piping material.

Con: Lubricating oil is corrosive to PVC and CPVC pipes. This causes the pipes to degrade in compressed air applications, splinter, and cause injury to facility members, resulting in loss of production.

Pro: ABS, PE, and HDPE pipes are oil-resistant and won’t degrade when in contact with lubricants.

There are still some concerns when it comes to purchasing plastic piping. Some mechanical professionals believe plastic piping isn’t viable because of the cement in the connectors isn’t strong enough and could cause leaks and bursts. When using plastic pipes, always ensure testing and approval by OSHA.

Many mechanical professionals, they’ll tell you they prefer metal pipes for a compressed air piping system. Why, you may ask? Many believe the look and feel of metal pipes are more reliable, stronger, and safer than plastic pipes. Some benefits of metal pipes are:

There are 5 main categories of metal pipes:

Pros: The black steel pipe is traditionally used throughout a compressed air system. Not only is it strong and durable, but many technicians are familiar with its installation.

Cons: It’s susceptible to corrosion. If pipes are suspended, they’ll need a strong anchor due to its heaviness. Since they’re normally heavy, it’s harder to cut and join them together.

Cons: The galvanized steel pipe’s coating tends to flake over time, which causes blockages and harm when released in the air stream. It also is difficult to maneuver. Threaded or welded joints are prone to failure, and requires a higher strength from suspension due to their weight.

This type of metal is predominantly used to be pressed or welded. It has the same connector faults for threading and welding that the galvanized steel pipe has.

Pro: No risk of corrosion or degradation on both exterior and interior surfaces. Optimal for plants that need to keep their environment sterile.

Cons: Its higher performance comes at a high initial cost.

Aluminum pipes have the same anti-corrosive elements of stainless steel but without the weight.

Pro: Copper pipes are corrosion-free, easy to cut and weld, lightweight, and have a variety of fittings available. It is also easy to suspend, and has numerous technicians who are familiar with this material.

Many of the newer metals such as stainless steel, aluminum, and copper pipes, are more popular over the galvanized and black steel piping. Even though this is the case, older metals are still widely used today. This is because they are less expensive, and technicians prefer to work with them.

At Rasmussen Mechanical Services, we take service beyond meeting standards and checking boxes. From installing new compressed air piping systems or fixing existing, our service team can help. If you want to find out more about how we can help, contact us to schedule an appointment. 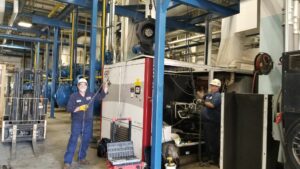