To understand the scroll compressor’s advantages and disadvantages, you must first have a general understanding of compressors. While every type of compressor is unique, the basic principles stay the same. First, a gas or electric motor provides energy to push air into the compression chamber of the device. Next, the compression chamber squeezes’ air into a desired volume before discharging it for use in various applications. 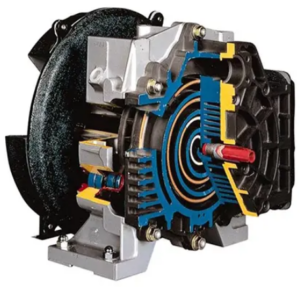 The Design Of A Scroll Compressor

The inside of a scroll compressor holds two spiral “scrolls” that work in unison to compress the air that enters the machine. Scroll 1 is an immobile spiral that works as the compression site. At the same time scroll 2 is nestled inside of the immobile spiral, the crank shaft is moving it in a tense motion. As inner scroll orbits the inside of the immobile scroll, compression takes place. Since the design of this machine has a small number of individual pieces, scroll compressors are able to boast a high rate of reliability.

Scroll compressors distance themselves from the competition by being an oil-free alternative to other positive displacement compressors. For example, the rotary screw compressor is reliant on lubricants like oil to avoid wear and tear in use. Having to rely on oil creates the possibility for many issues to arise during the life span of the machine. However, with a scroll compressor, you have one less thing to worry about when compressing air.

The Scroll Compressor’s Advantages and Disadvantages

At Rasmussen Mechanical, we know that it’s important to understand the pros and cons of a product before you place it in your facility. Below are some of the scroll compressor’s advantages and disadvantages to aid in deciding if it is compatible with your business.

One of the largest threats to any piece of compression equipment is the presence of excessive waste build up. Waste buildup has the potential to halt the performance of a device, leading to expensive repairs and wasted time. The scroll compressor almost guarantees that every ounce of the air that enters the scrolls, leaves the compression area. The orbital movement assures that all particles become diminished as compression finishes.

The scroll’s simple design allows it to operate at an audible volume that is hardly noticeable. The absence of high vibration rates leads to an extremely low hum, rivaling the general decibel level of a library. Thanks to this, a scroll compressor holds more opportunities for installation in locations that require little to no background noise. And, as a direct result, businesses are able to forego purchasing expensive soundproofing equipment.

Due to the design of the scroll compressor, when a malfunction happens the unit is not immediately serviceable. The area where compression happens has a hermetic sealing, giving it a secure and constant airtight barrier. The integrity of the pressure chamber becomes compromised if the casing is opened, causing further problems surrounding efficiency.

How Does It Stack Up Against The Rotary Compressor?

Rotary compressors are another type of positive displacement compressor. The standard rotary compressor uses a two helical rotary to compress air. Air is lured into the gap between the rotary and as the volume decreases, the air is pressurized. Different than the scroll, both screws in the rotary are able to spin, doing so in opposite directions. Rotary compressors work extremely well in large industrial applications, while the scroll compressor finds use in health facilities and science labs. 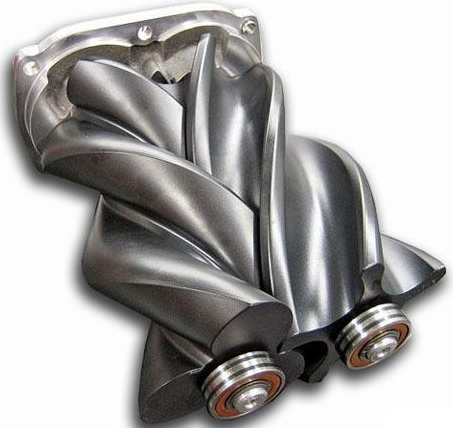 “Referred to generally as a twin screw compressor each rotor comprises of a set of helical lobes affixed to a shaft.